With thanks to Andy Bowie, who contributed this blog.

I love Tom Wright’s motif of heaven and earth being two spheres of God’s reality that overlap in different ways at different times.

At the 2015 City2City conference in Copenhagen, participants in the science/academic track challenged each other to think and operate in the true reality of the overlap of heaven and earth, and inspired one another with stories of how we had seen the activity of God’s kingdom in our scientific conversations and workplaces.

Those ‘thin places’ where we step into the moment where heaven and earth touch are exciting places to be, but it can be challenging for rational scientists to live in that reality! It requires intentionality of faith and belief to stand in that place and see spiritual innovation occur. 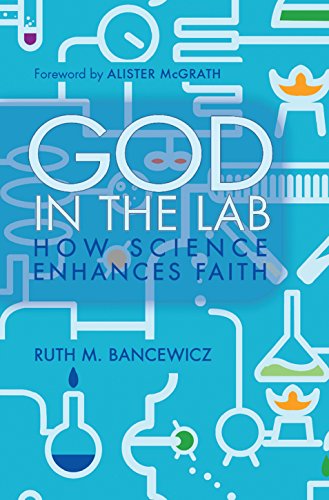 There are lots of good books out there that deal with intellectual issues of science and faith. These are great, and useful and important resources for releasing scientists of faith from false notions that science and religion are somehow in conflict. And they equip us to carry on that conversation with those around us in the science world.

But there are fewer books that celebrate how Christian faith can actually enhance science, and how science can enhance our faith: in other words how the pursuit of science and of God can go hand in hand as we seek to live in the reality of the overlap of heaven and earth.

That is why I love God in the Lab, a book written by Ruth Bancewicz that came out of wanting to move the conversation beyond the question ‘Is science consistent with faith?’ to the investigation ‘How science can enhance my faith’, and vice versa.

When I read a book like this, questions buzz around my mind. Many of these questions  have been discussed at City2City events in the past:

How much do I have a sense that I am in my academic position/discipline ‘for such a time as this’?

What are the next steps that will bring more of the ethos of the Christian faith into my sphere of influence?

What part am I going to play to make this happen?

What follows in this blog is my review of Bancewicz’s book. I hope that some of you will be inspired to pick it up and take a good look. It’s fascinating reading whether you are a scientist or not.

Conversations about Christianity and science

Ruth Bancewicz is a former research biologist, now a senior research associate at The Faraday Institute for Science and Religion. She has contributed significantly to the conversation between Christianity and Science over the past decade, especially with the production of the excellent ‘Test of Faith’ website and resource materials. As she explains in the first chapter of God in the Lab, this current book represents an attempt to start new conversations about the interface between science and faith, rather than simply responding to common issues raised. The book is the final output of a Templeton Foundation-funded project, which also included her blog scienceandbelief.org.

The provocative subtitle of the book, How Science Enhances Faith, sums up the author’s goal in writing. Here we go beyond a discussion about how science is consistent with faith, and how it is possible to be a scientist and a Christian (still a radical idea for many), to how science and faith can actually mutually benefit one another. In that regard, the subtitle could equally be ‘How Faith Enhances Science’.

The journey for readers

The journey that the author brings us on, which she clearly is very passionate about, is three-fold:

The style of the book is similar to some of Bancewicz’s blog posts, being personal and conversational. Much of the content is drawn from interactions and conversations with research scientists who are Christians.

Chapter 2, ‘Life in the Lab’ is fascinating. The author suggests that ‘practising scientists may wish to skip this chapter’ (p. 13), yet as a practising scientist this was one of the most interesting parts of the book to me, as it describes very accurately how day-to-day research works in a modern science lab. In addition, this chapter contains lots of interesting insights from Dr Harvey McMahon about ideas and thought processes that underpin his approach to research as a Christian.

I think other research scientists will also find this chapter highly interesting, as much as a ‘compare and contrast’ exercise with one’s own approaches as a very successful exercise in explaining how a research lab functions. For anyone from a non-science background wanting an insight into how research actually works, this is excellent material.

The main themes of the book are covered in Chapters 4 to 8:

In each of these chapters, Bancewicz carefully weaves together her own personal insights, historical perspectives, biblical content and quotations and thoughts from named scientists gathered from interviews, which gives a well rounded picture of how these topics are critical to both good science and good theology. There is a logical flow to the order that they are dealt with too, and each chapter builds on insights from the previous one, which does lead to a sense of arriving at the heart of the authors thesis once one gets to ‘awe’.

As might be expected, the attempt to cover such vast topics in such a short book does make some of the sections feel incomplete, or as if they are only scratching the surface. For me, an example of this was the section on ‘God and Imagination’ (p. 105), which very briefly began to address the idea of how using our imagination is a reflection of being made in the image of God, but then wound up far too soon. However, the goal of the book is not to be comprehensive, but to be provocative and to initiate new conversations about science and faith, a goal that the book definitely does achieve. For those wanting more, there is a good bibliography included, too.

I found the final chapter an excellent and succinct synthesis of the ideas discussed in the book, and a helpful summary of the journey that the author has brought the reader though. In fact, I would recommend that this chapter be read first prior to launching into the book, as a compass for the journey ahead.

Overall I found the book highly readable, although at times it took me a while to ‘catch up’ with the author’s thinking or thought structure on the more abstract topics such as imagination and wonder, probably due to the fact that although we all think about such topics, its still quite rare to read about them in the context of science and faith intersecting.

This book will appeal to a number of audiences, both young and old, academic and non-academic, and this is one of its great strengths. I think it will appeal to:

I hope all readers will be challenged by how comfortable Christian scientists are with expressing their faith through their scientific research – a faith that enhances science rather than co-existing uncomfortably with it.

Andy Bowie is a professor in Immunology at Trinity College Dublin, where he leads a research group devoted to understanding how our cells detect viruses during an immune response. He is also a leader in Trinity Church and has been involved in leading the Science and Academic spheres at City to City conferences since 2010.